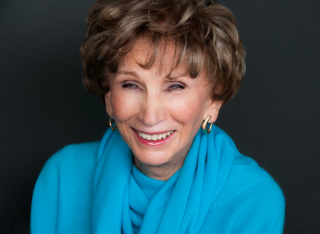 Outside Chapter Members: Welcome to join

Listen to her interview with Oprah here: https://www.youtube.com/watch?v=9k39X6Osr0k

Dr. Eger is a sought-after clinical psychologist and lecturer, helping individuals discard their limitations, discover their powers of self-renewal, and achieve things they previous thought unattainable. Using her past as a powerful analogy, she inspires people to tap their full potential and shape their very best destinies. Hers is a message of healing and personal growth. A message of freedom from self-imposed limitations. A message that helps people build character, deal effectively with life’s events, and enrich the lives of others.

A native of Hungary, Edith Eva Eger was just 16 years old in 1944 when she experienced one of the worst evils the human race has ever known. As a Jew living in Nazi-occupied Eastern Europe, she and her family were sent to Auschwitz, the heinous death camp. Her parents lost their lives there. She and her sister survived even though they were subjected to the horrible treatment by Dr. Josef Mengele and survived the Death March from Poland to Austria. In May 1945, when the American Army liberated theGunskirchencamp, Edith was near death. A young American soldier noticed her hand moving slightly amongst a number of dead bodies. He quickly summoned medical help and brought her and her sister back from the brink of death.

After the war, Edith moved to Czechoslovakia where she met the man she would marry. In 1949 they moved to the United States. In 1969 she received her degree in Psychology from the University of Texas, El Paso. She then pursued her doctoral internship at the William Beaumont Army Medical Center at Fort Bliss, Texas. She has spent much of her professional time working with members of the military helping them to live productive lives and heal from PTSD. Dr. Eger has always found ways to use her personal experiences to inspire, educate and help others. She continues to work with patients from many walks of life in her practice in La Jolla, California.

Dr. Eger is an author and member of several professional associations. She has appeared on many, many television programs including Oprah Winfrey and Larry King Now and was the primary subject of a holocaust documentary that appeared on Dutch National Television. She is frequently invited to speak throughout the United States, as well as internationally. Dr. Eger has a clinical practice in La Jolla, California where she uses her past as a powerful analogy to inspire people to reach their potential and shape their destinies.

Register using eonetwork.org. If you register but don’t show up, there is a $50 charge to cover event expenses based on the registration count. To un-register, email jennifer@eo-sandiego.org.